Spooky Actions is a New York based jazz and new-music ensemble whose diverse recordings include the music of 20th century composers Anton Webern, Arnold Schoenberg and Olivier Messiaen; interpretations of Native American music, and most recently, early music from the 2nd century BC through the 1500’s. Their unique and compelling sound is being met with critical acclaim and widespread interest.

“They address Webern’s music on its own terms and shed new light on its strange beauty…Spooky Actions has given jazz fans a great way to enter his world.”
Andrew Lindemann Malone Jazz Times April 2004

“They navigate the transition between score and improvisation adroitly. A Fascinating experiment.”
Jason Bivins, CADENCE 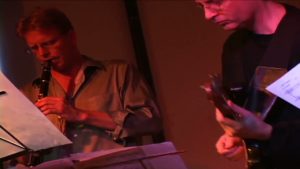 The band was founded in 1997 by John Gunther (sax, clarinet, & flute) and Bruce Arnold (electric processed guitar). The two musicians jammed and felt an immediate musical affinity. When they both started bringing in classical music to improvise over, they were inspired to start making their own transcriptions of early and modern classical music and to create a series of recording projects.

“I’ve often thought of music as a vessel of the human spirit, a message in a bottle that can travel across an ocean of time, and deliver a “note” from Bach, or Charlie Parker.” So writes John Gunther in his essay for their latest release “Early Music.” “Perhaps embedded in the intervals and sequences of the melody and rhythm are the thoughts and emotions of the composers themselves” he continues. Thus he states the raison d’être for Spooky Actions, and its continued mining of diverse repertoire for examination and re-interpretation.

The name Spooky Actions is derived from a comment by Albert Einstein, in which he noted that certain seemingly unrelated objects could nevertheless exert a powerful influence upon each other. He called these relationships “spooky actions at a distance.” Spooky Actions, the band, certainly personifies this concept, showing how vivid and accessible improvisations can be derived from music that is often thought of as “etched in stone.